I saw @Gtotoy's tweet this afternoon on $CRR and I made this same mistake in $NFLX today. First off, want to say awesome trade to the traders who caught the move from the 70's to the 90's such as @SunriseTrader. It would have been insanely reckless of me to try and chase that move at any point once it got moving, however, the amount of attention it was getting on the stream, put it back on my radar. So I watched that entire run, without a position it. The move created a nice a nice pivot once it got into the gap. The last few days it pulled back to the 90-94 area on declining volume. Yesterday putting in doji bar. My plan was to get long through yesterday's high, which I did. The target on the swing trade a is move to fill its gap, up near the 119-120 area.
Either way, I entered, but didn't peel any off mid morning, (greedy), was waiting for follow thru in the afternoon. By the time it started to get some legs and resume its up move, it was late afternoon. While I made about 2pts on the trade, I didn't have enough room to feel comfortable holding over the long weekend. Excuses I know. Had I peeled 1/2 to 3/4 off mid morning, I would have been more comfortable holding. Even with two points of room I SHOULD HAVE, held a small core position. I hate hearing would've should've could've...mistakes. While it was a awesome week, I botched $CF too getting wicked out at a break even in the gap down yesterday morning and not staying on top of it. Had a solid move yesterday with follow thru today. Congrats to @Gtotoy and the #DTBC crew who are still on it.
I still like the bar $NFLX put in today as volume was above average, I will most likely look for entry as it clears the 100 mark or possibly a gap down next week.
Lesson? Follow your rules. I didn't today and I'll have to wait for an another entry next week. Hope everyone has a great weekend. 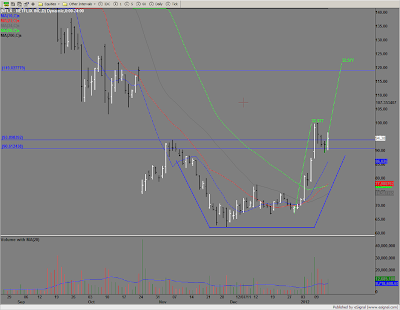 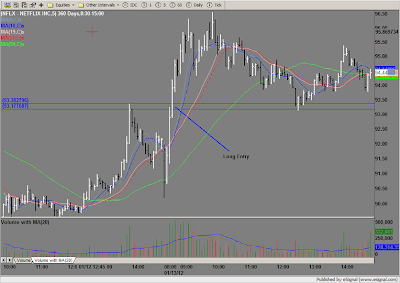